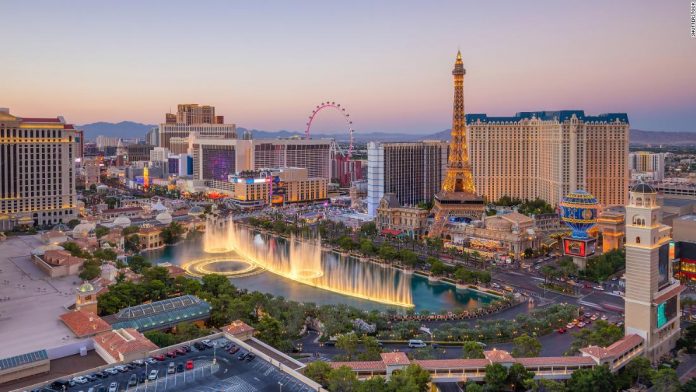 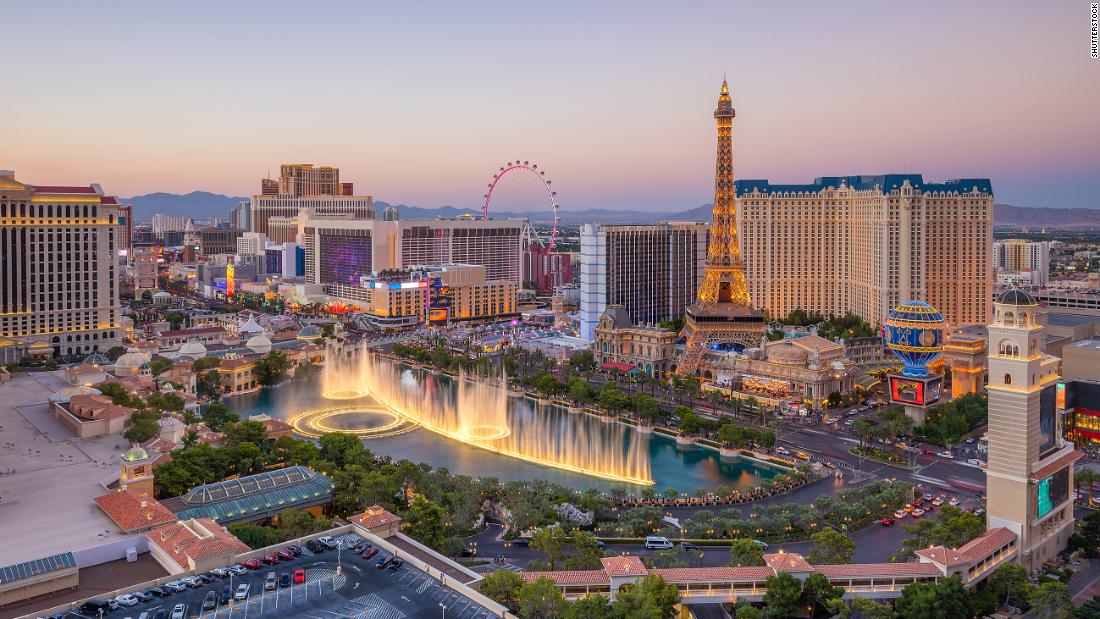 Las Vegas (CNN) — Between the glitz, the glam, the endless buffets and those seas of slot machines, megahotels in Las Vegas quickly can blend together.

Still, to be clear: Not all Vegas resort destinations are created equal. Some properties excel with casino offerings, while others shine in the food and beverage department. Some have great spas, while others are great for nongamblers. Here are 12 of our favorite casino hotels where guests can roll the dice, eat like royalty, party like Rhianna or Ed Sheeran and take in some unforgettable views as they play:

The sports book—that part of the casino where you wager on sports—inside Caesars Palace is a sports-lover’s paradise that draws huge crowds and delivers a tailgating-style experience during big games to the 15,580-square-foot corner of the gaming floor.

The book’s pride and joy: a 138-foot LED video wall that comprises six oversized 12-by-15-foot screens, 12 50-inch plasma screens and 20-by-50-foot LED board with up-to-the-minute betting lines on all the games.

The configuration gives the casino’s oddsmakers the option to carry dozens of sporting events at any given time. Renovations in 2017 added a bar and 140 comfy chairs, and with a new app, bettors can order food off a limited menu and have everything delivered to their seats.

ARIA doesn’t only boast one of the largest slot-machine floors on the Las Vegas Strip; it also offers one of the most exclusive high-limit slot rooms anywhere in Nevada.

That high-limit room, dubbed SPIN, has some machines that cost up to $5,000 per pull. It was designed by New York-based architect Peter Marino, and it has a separate area to exchange slot tickets for dollars, private bathrooms, a full-service dining area and a staff of butlers to cater to every guest’s needs.

Overall, the resort is home to nearly 2,000 slots, including current-day favorites such as Anchorman, Wheel of Fortune 3-D, The Simpsons and The Walking Dead II. The casino hosts a slot tournament several times per year.

Newer spots have come and gone, but the poker room at Bellagio remains a favorite among veterans and amateurs alike. The cavernous space near the sports book has 40 tables in all, often a healthy mix of limit and no-limit Hold ‘Em (with a daily tournament at 2 p.m.), Omaha and more.

Players can get drinks, food, and—believe it or not—back and neck massages delivered tableside (yes, while they’re playing) at any time of day or night.

The highest-stakes games are held in a back area dubbed Bobby’s Room, named after Bobby Baldwin, the 1978 World Series of Poker Champion who’s now an executive for MGM Resorts International. Peek back there late-night and you might spot pros playing for millions.

You don’t have to be betting big at the craps table to have a memorable night at MGM Grand. While the casino is known for its vast table games pits and one of the stingiest slot machines in Vegas history, the expansive destination has plenty of diversions for non-gamblers as well.

Be sure to check out LEVEL UP, the glorified arcade for grown-ups just inside the “front door” by the golden lion. In addition to beer pong, the fun zone has Pop-A-Shot, billiards, one of the largest games of Pac-Man on Earth and an original Sigma Derby — a horse race-themed slot machine that lets players bet on individual horses.

Another must-see: CBS Television City, where visitors can sign up to focus-group new shows from CBS, MTV, Nickelodeon and other Viacom networks.

Downtown’s swankiest casino also happens to be the best place to experience a broad variety of table games.

Floor managers at the Nugget historically have welcomed table-game pilots, meaning that depending on when you visit, you might find a brand-new game or two on the main gaming floor.

Case in point: This was one of the debut locations of Free Bet, a blackjack derivative that offers players generous options to increase their winnings in exchange for ties when the dealer gets 22 (as opposed to regular blackjack, in which a 22 would mean a dealer bust and a win for the players).

In addition to the steady stream of newcomers inside, Golden Nugget also spreads table games outside by the pool; just be sure to keep your money in a waterproof pocket.

Glimmering like a ruby at the base of the Spring Mountains, Red Rock is a Strip-style casino on the far-western edge of the Las Vegas Valley—the first billion-dollar resort in the region to be built off the Strip.

For visitors, this means proximity to hundreds of miles of open space without sacrificing vibe. It also means a world class spa, a thumping pool scene, swanky bars, a bowling alley, a huge bingo hall, a movie theater and a gambling floor as hip as any of those in the main tourist corridor.

7. Best casino for foodies: The Cosmopolitan of Las Vegas

Epicures feel right at home at The Cosmopolitan, where the restaurant collection is chock-full of eateries from decorated chefs. Jaleo serves tapas and other Spanish-style food from Jose Andres. Momofuku represents David Chang’s first foray into the Vegas market. The newest of the bunch, Beauty & Essex, serves up quirky share plates from Chris Santos. And after a night of drinking and partying, nothing beats a New York-style slice from Secret Pizza.

The resort also is home to The Chandelier, a bar where mixology wizard Mariena Mercer has put together a menu that boasts modern twists on classic cocktails and drinks you can eat. Yes, you read that right: Mercer’s current edible cocktails include some options with edible paper, and an off-menu favorite that amounts to a margarita with a dried flower that numbs your taste buds first.

It stands to reason that the tallest structure in Sin City (1,149 feet in all) and tallest freestanding observation tower in the United States would offer the best views of the Vegas Valley.

The Stratosphere Tower is more than just an icon in the desert — it’s an observation platform with a rotating restaurant, the highest SkyJump in the world, thrill rides that dangle over the edge and rocket into the sky and the highest bar in Vegas.

The rest of the resort is worth exploring, too, especially the adults-only rooftop pool on the 25th floor of the hotel and Roxy’s 50s-style diner. If you’re looking for tchotchkes, there’s ample opportunity to shop in the mall at the base of the tower.

Got the family with you? It’s time for Circus Circus.

The name says it all: Circus Circus is a place that delivers fun for the whole family.

Most of this fun happens in the Adventuredome—a five-acre indoor canopy with everything from carnival games, roller coasters and a carousel to a video arcade, Skee-Ball, bumper cars and kiosks with fair food. Every hour on the half-hour, witness acrobats performing free circus acts such as slack-line, unicycle and more.

Outside, a pool area known as the Splash Zone has a slide tower that rivals those at nearby water parks. For grown-ups interested in learning how to gamble in a fun and safe environment, Circus Circus even offers free lessons in blackjack, craps and roulette every day at 10:30 a.m.

With 2,700 tons of real sand and a 1.6-million-gallon wave pool, it’s no wonder that Mandalay Bay refers to its pool area as the “beach.” The water wonderland also features dipping pools, plunge pools, hot tubs and a lazy river, providing ample opportunities to cool off in the desert sun.

For those who prefer to sunbathe in the nude (or “toptional,” as they like to say) the Moorea Beach Club offers relaxing daybeds and private living room-style seating areas for an additional fee. There also are more than 100 cabana options, including swanky, suite-like bungalows equipped with televisions, refrigerators and ceiling fans (these all cost extra, too).

During the heart of pool season, which runs May to September, Mandalay brings in headline acts to play outdoor concerts.

11. Best casino spa: The Venetian and The Palazzo

Yes, we know most people consider The Venetian and The Palazzo to be two separate casinos. Technically, however, the two operate under one gaming license, and The Canyon Ranch SpaClub connects them both. The spa is a world onto itself: 134,000 square feet in all. The facility prides itself on offering more than 150 services ranging from massages to facials and scrubs.

There’s a full-service salon, and a host of wellness services. The spa also is the only place on the Strip with an Aquavana experience, which includes a steam room, a Finnish sauna and more. Elsewhere, there’s an expansive fitness center, a 40-foot-tall rock-climbing wall, two healthy gourmet restaurants and a salon with a barber suite for men. Canyon Ranch also has a full range of fitness classes such as spinning, Pilates, barre and yoga.

The casino resort that pays homage to Hollywood fittingly has some of the best entertainment in town. Britney Spears’ run at the resort is over, but current and scheduled musical headliners include Jennifer Lopez, Lionel Richie, Backstreet Boys and Pitbull (performers rotate throughout the year).

Add to the roster Murray the Magician of “America’s Got Talent” fame and Crazy Girls, the iconic Vegas adult revue that spent decades at the now-defunct Riviera, and the options are plentiful. The property even has a long-standing relationship with the television show, “EXTRA,” which often films on-site.

Matt Villano is a writer and editor based in Healdsburg, California. He has covered Las Vegas since 2003, and he has updated and written 11 guidebooks about the city.