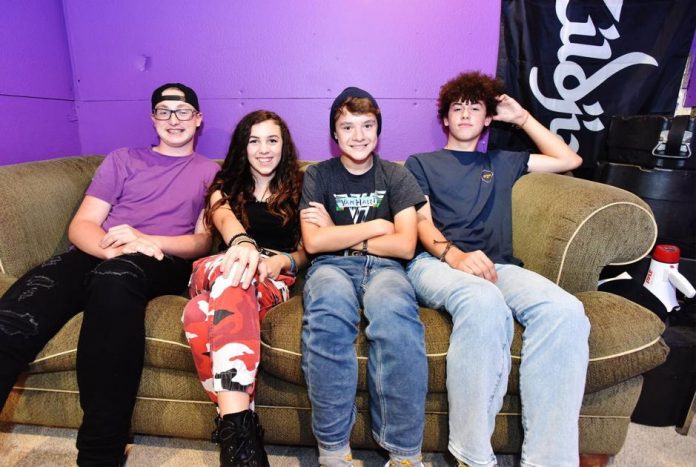 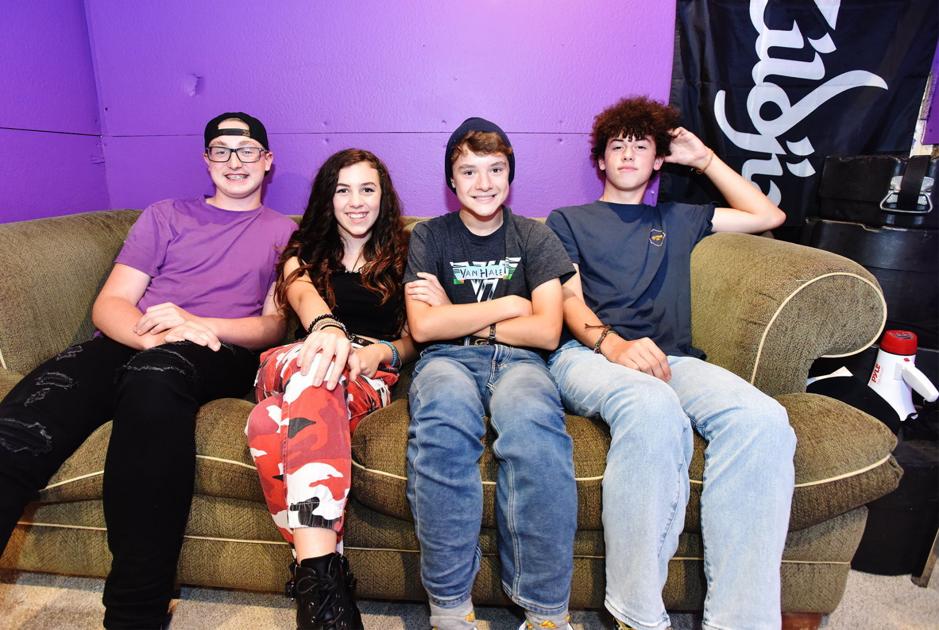 WRIGHT TWP. – Four talented teens who formed a pop rock band less than two years ago are proving their musical chops, performing gigs across the state, and have even cut two singles.

Virginia Franks, Luke Vanchure and Carter Dennis, all of the Mountain Top area, and Ethan Cutillo, of Clarks Summit, have taken the stage dozens of times as members of the band Burn the Jukebox since they started playing music together in February 2020.

The band will wrap up a six-month, 35-concert tour at campgrounds and family fun parks in Pennsylvania, presented by Campfire Marshmallows, on Oct. 31.

Virginia, a 14-year-old freshman at Crestwood High School who plays electric bass and provides lead vocals for the band, started looking for a good guitarist in January 2020 “because I figured, hey, starting a band sounds like a great idea.”

She found Luke, one year her junior and a student at Crestwood Middle School, through a mutual friend, she said during an interview before a recent band practice in the basement at Carter’s house.

“And then I found you,” Virginia said to Carter, her 14-year-old classmate at Crestwood and the band’s drummer, “because our parents were already friends. Then we were contacting piano teachers all over the place, and we found you,” she told Ethan, a 13-year-old student at Our Lady of Peace School who plays keyboard and also handles lead vocals.

The teens played their first gig in public for free, just for the experience. It was at a fall festival at Community Park in Hazle Twp., a booking arranged by their band manager, whom they call their “momager” because she’s Virginia’s mom, Julie Franks.

The band recently released a new single, “Meltdown,” on their website, burnthejukebox.com, as well as on all streaming platforms, and they’ll be embarking on a middle-school tour in the winter and spring. In addition to their paid shows, Burn the Jukebox donates performances when possible for nonprofit organizations, such as a recent show for Autism Awareness NEPA on Oct. 10 outside Mohegan Sun Arena.

The band also recently shot a pilot for PBS.

Prior to “Meltdown,” they released “Reboot,” a song about rebooting a relationship, and filmed a music video for the song, which has more than 10,000 views on YouTube. Most of the scenes in the video were shot in a movie theater to incorporate the concept of a movie reboot, or remake.

“It was a really fun video to film,” Ethan said.

“Eventually, one day, we hope that our entire show will just be originals, and that’s it,” Virginia said.

“Till that time,” Ethan added, “we’ve been doing a lot of cool cover songs.”

The teens enjoy putting together clever, fun medleys, such as their “Jump Medley” in which all of the songs, such as Van Halen’s “Jump” and “Jump in the Line” (Shake Senora) from Beetlejuice, have the word “jump” in the title.

And they’re proud that they opened for Fair Warning, a popular Van Halen cover band. But their third gig at Splash Magic Campground in Northumberland County was a favorite because the crowd was huge and the show was interactive. They’re especially looking forward to performing post-game shows at Mohegan Sun Arena after six Wilkes-Barre/Scranton Penguins hockey games this fall and winter.

The band members post a lot of videos of their performances, as well as videos of them having fun and interacting with fans, on all streaming platforms, including TikTok, Facebook, YouTube and Instagram, to help build their fan base. One video on Instagram has over 2.7 million views and over 95,000 likes.

Virginia said the band soon will be coming out with a silly behind-the-scenes video that promises to be a lot of fun.

The band practices twice a week — usually about two hours on Wednesdays and anywhere from three to five hours on Sundays. And they usually play at least one gig every weekend.

How do they juggle band life with schoolwork?

“I do school, come home, I sit down and if I’m not … getting homework done, I’m playing drums,” Carter said.

“I come home, do homework, eat, … then I play instruments, and then I go play video games or watch a movie or something on Netflix,” Virginia said.

When Ethan has homework to do, he tries to get it done while he’s still at school before a class begins or during a break, or on the ride home.

Luke admits finding that balance can sometimes be a struggle.

As for their future plans, the bandmates all hope the band takes off and becomes more successful, and they all see music playing some part in their careers if the band ever does break up.

“It’s going good for us, and it’s what I want to do,” Luke said of playing with Burn the Jukebox. “We’re all happy, we’re all good friends, so it all works out.”

“I would obviously love to have this band kick off and be on tours,” Carter said. “I always thought it would be really cool to be a touring drummer, and hopefully it happens. But, regardless of what happens, I want to go to a school and learn about sound engineering, like running sound for bands, or recording.”

Ethan knows he wants to attend college, but the rest is up in the air.

“I’m not set on a job yet, it’s not like I would like to do this when I grow up, but I like a lot of creative stuff. I was thinking being an architect might interest me, but I like music, too, so production might be a fun industry. I looked at a lot of different things, but I’m going to go with the flow. I want to and get a good education and see where it takes me,” Ethan said.

Luke can see himself attending Berklee College of Music in Boston.

“I think Berklee would be a good school. … They have everything I want (for career options) if I’m not a musician anymore, which I don’t think would happen. I’m probably going to be a musician for the rest of my life,” Luke said.

Virginia doesn’t know where she wants to go to college.

“But I do kind of have an idea of what I want to do. I’m a huge Disney fanatic,” Virginia said, expressing hopes of working for or producing content for the company. “I love engineering and all that. But if this band didn’t blow up, which I really hope it does, that would probably be my backup plan.”

Words to live by

And their advice for other kids?

Luke recommends making sure they express themselves.

Carter’s advice is simple: “Do what makes you happy.”

“And if you have a passion of any sort … keep doing what you love,” Ethan said. “Even if you can’t do it well, you’ll get there.”