BRINGING THE HEAT: Gawdin inching toward franchise record in Stockton 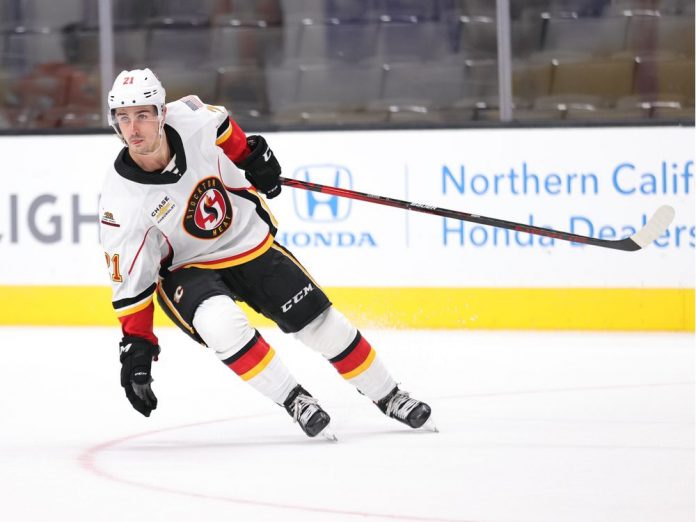 Author of the article:

The ultimate goal is to climb the ladder, to earn another call-up to the Saddledome and stay put next time.

As Calgary Flames forward prospect Glenn Gawdin continues that quest, he’s proud to also be climbing the franchise scoring charts in the minors.

Now 24 and in his fourth season of professional puck, Gawdin is on the brink of becoming the all-time leading point-producer on behalf of the American Hockey League’s Stockton Heat. The soft-spoken centre needs only a pair of score-sheet mentions to equal the current club mark, which belongs to since-departed sparkplug Ryan Lomberg.

It should be just a matter of time before Gawdin takes an eraser to Stockton’s record book.

Unless his teammate and close pal, Matthew Phillips, beats him to it.

Or unless he receives a call from the 403 area code with instructions to stuff a suitcase and hustle to join the big club.

“And if you look at the guys on that list, I think Lomberg is in first and then (Andrew) Mangiapane is up there, and they’re both full-time NHLers now,” he added. “That’s where I want to be, and I know that’s where Philly wants to be. So as much as it is nice, we’re both still working to make the NHL. We’re not playing to be AHL leading scorers. We want to move on and get to the NHL.”

Gawdin cracked Calgary’s opening-night roster this fall but logged only two appearances before he was reassigned to the farm. He’s notched one goal and eight assists in seven skates since returning to Stockton, boosting his career count to 107 points in 146 outings on AHL ice.

Lomberg, now causing chaos for the Florida Panthers, amassed 109 points in 219 appearances with the Heat.

Mangiapane (104), Phillips (102) and Morgan Klimchuk (100) are the only others to hit the century mark since the Flames relocated their top affiliate to California in 2015.

“Time goes by pretty quick,” said Phillips, 23, after reaching triple digits this past weekend in his 142nd game in Stockton’s silks. “It feels like yesterday I was just getting my rookie season going.”

In Calgary, that is.

He’s so far suited up for nine games in the Flaming C, which means that he is still classed as a freshman in the best league in the world. Although he didn’t look out of place while starting this season as fourth-line centre, he ultimately lost his lineup spot because head coach Darryl Sutter wanted to try Dillon Dube up the middle. (Dube was shifted back to the wing for Thursday’s matchup with the Montreal Canadiens but with veteran Brad Richardson having gobs of experience at pivot, there was no need for a call-up.)

While Gawdin’s case for a promotion won’t necessarily be judged on goals and assists, he wants to be considered an all-around package and productivity is part of that. He averaged at least a point-per-game in each of his final three seasons in junior and was runner-up for the WHL’s scoring title as a soon-to-be grad, so the skill is certainly there.

“Last year was obviously a down year for myself,” said Gawdin, who was an AHL all-star in 2019-20 but managed just 13 points in 22 minor-league twirls last winter. “Coming into this year, I feel like I can produce numbers and that’s something I want to do. So far, I’ve been chipping in that way and hope to continue. But I also take a lot of pride in my defensive game and I know that when you go up to the NHL, that’s a big emphasis, especially with the way the systems are up there, that you have to be able to check and do all those things.

“You know, I feel like I’ve taken some strides down here. I just want to continue to do that. It just goes back to that consistency — you have to do it every night.”

There’s one thing that the Heat seem to be doing every night — winning.

With Wednesday’s overtime victory in Bakersfield, home-base for the Edmonton Oilers’ up-and-comers, the Baby Flames improved to 8-0-1. Their lone setback came in the season-opener.

“I think we’re just continuing to get better,” Gawdin said. “We’re not complacent, even after a good start.”

Who’s not? While this is usually an individual spotlight, this entire crew deserves credit since the farm club has rolled to eight straight victories, matching the longest streak in Stockton’s franchise history. The Heat also won eight in a row last winter, when they were temporarily based in Calgary due to cross-border travel restrictions.

Jakob Pelletier was Wednesday’s overtime hero against the Bakersfield Condors. The 20-year-old left-winger — skating alongside Adam Ruzicka and Matthew Phillips on Stockton’s top line — has racked up 11 points in his first nine outings at the AHL level and has been coming up big in the key moments. Pelletier has already scored three game-winning goals and assisted on two others.

Sign up to receive daily headline news from the Calgary SUN, a division of Postmedia Network Inc.

Thanks for signing up!

A welcome email is on its way. If you don’t see it, please check your junk folder.

The next issue of Calgary Sun Headline News will soon be in your inbox.

We encountered an issue signing you up. Please try again

Postmedia is committed to maintaining a lively but civil forum for discussion and encourage all readers to share their views on our articles. Comments may take up to an hour for moderation before appearing on the site. We ask you to keep your comments relevant and respectful. We have enabled email notifications—you will now receive an email if you receive a reply to your comment, there is an update to a comment thread you follow or if a user you follow comments. Visit our Community Guidelines for more information and details on how to adjust your email settings.