David Warner says he ‘doubts’ if SRH will have good auction, franchise congratulates him on Ashes win 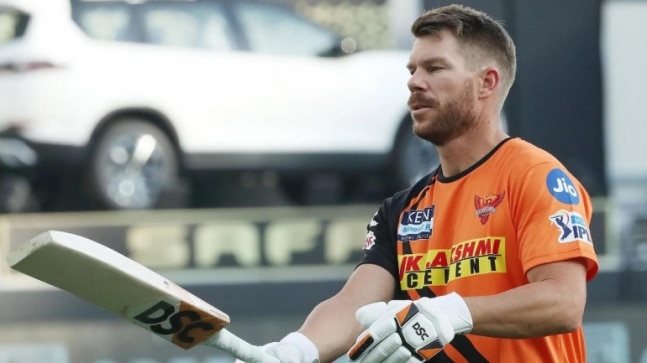 David Warner said in reply to a fan’s comment on Twitter that he doubts if SunRisers Hyderabad (SRH) would have a good auction ahead of the 2022 Indian Premier League (IPL).

Warner was unceremoniously dropped as SRH captain. (Courtesy of BCCI)

David Warner’s fallout with SunRisers Hyderabad (SRH) was one of the biggest stories of the 2021 season of the Indian Premier League (IPL) and there were new chapters added to the situation even after the end of the season. While it is confirmed that Warner will be playing for a new team next season, the explosive Australian opener has continued to mention SRH in his social media and interact with their fans.

SRH took note of Warner’s tweet and said that it looks like he is back to his best form before congratulating him on winning the Ashes.

Congrats on the Ashes win Davey – Looks like you are back to form and enjoying the after party! On the other hand we hope you have a good auction! https://t.co/grZrRn5Zqm

Warner suffered a downturn in form with the bat in the 2021 season of the IPL, scoring just 195 runs in eight matches. It was the first time since 2014 that he had scored less than 500 runs in an IPL season. Halfway through the season, SRH announced that Warner had been replaced by Kane Williamson as captain of the team. He was later dropped from the squad altogether with a few games left to go in SRH’s floundering season.

Warner has since experienced a resurgence, winning the player of the tournament as Australia won the T20 World Cup last month. He has scored 240 runs in four innings since then in the Ashes, getting dismissed on 94 and 95 in the first two innings that he played in the series. Australia stormed to an unassailable 3-0 lead on Tuesday, dismissing England for a paltry 68 runs and thus recording an innings victory in the third Test.