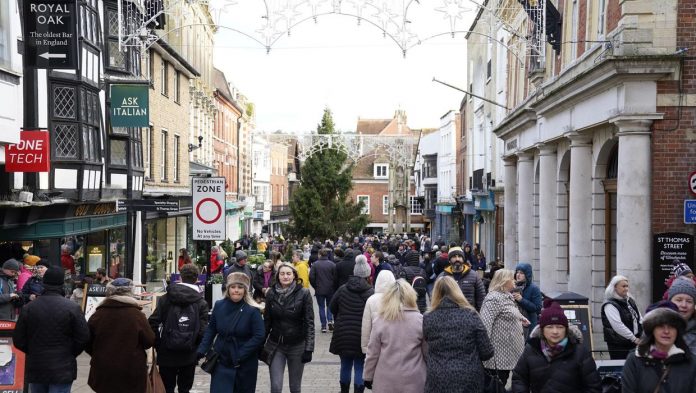 Customers have been staying at home in the crucial run-up to Christmas, slashing the UK’s economic growth to its slowest pace since February when the country was in lockdown.

usinesses say that they have been hit by lower customer demand in December since Omicron came to the UK and new restrictions were imposed.

The figure is based on preliminary data, and is likely to change at the end of the month.

It shows growth, anything above 50 is positive, but is much slower than November’s 57.6 score.

“The flash PMI data show the UK economy being hit once again by Covid-19, with growth slowing sharply at the end of the year led by a steep drop in spending on services by households,” said IHS Markit chief business economist Chris Williamson.

“Some brighter news came through from manufacturing, where an easing of supply chain delays helped lift production growth, but more importantly also helped take some upward pressure off prices to hint at a peaking of inflation.”

He said that the spread of Omicron means the UK will likely face a further weakening of economic growth as it heads into 2022.

“The services sector took the brunt of these changes with the softest expansion of new orders since the pandemic recovery started in March and curbs on travel hit overseas business growth for the first time in six months,” said CIPS group director Duncan Brock.

“Though UK consumers stayed away from restaurants and bars in greater numbers, there was one cup of good cheer in relation to the hoped for softening in prices charges and business costs as both improved this month.”

The figures are further evidence of what company bosses have been saying over the last week: that they will struggle over what should have been the busiest period of the year.

Earlier on Thursday Kate Nicholls, who is the boss of trade body UKHospitality, asked the Government to extend VAT discounts and business rates relief for her members.

Hospitality sales have plunged by a third over the last 10 days, she warned, meaning that £2 billion of trade has been lost so far this month.

Facebook
Twitter
Pinterest
WhatsApp
Previous articleLiveInternet @ Статистика и дневники, почта и поиск
Next articleSafety Eric Berry said he was hopeful he could come to an agreement on a long-term contract with the Chiefs before Wednesday’s deadline for teams to designate franchise players. “I’m just being patient because you never know . . . I’m not getting my hopes up,” Berry said. Berry said he hasn’t changed his earlier stance that he wouldn’t play with the Chiefs for the second straight season on the franchise tag. “I still stand by that,” Berry said.