Jewar airport will create 1 lakh jobs; UP to have 17 airports by 2026: Jyotiraditya Scindia 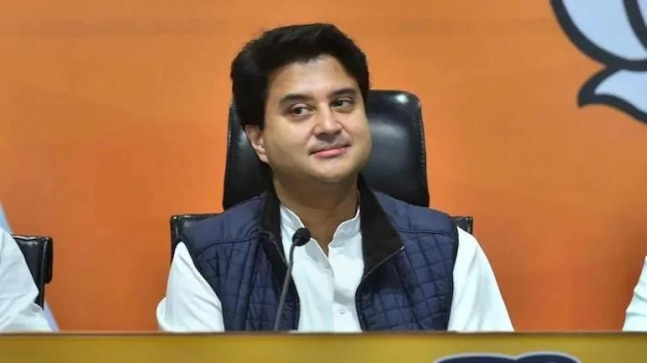 Prime Minister Narendra Modi will lay the foundation stone for Noida International Airport in Jewar, Uttar Pradesh on Thursday. The new airport, whose first phase is expected to be completed by 2024, will be the poll-bound state’s fifth international airport.

Speaking exclusively to India Today TV on the eve of the mega foundation laying programme, Civil Aviation Minister Jyotiraditya Scindia said that the new airport is a “dream project.”

READ: Noida Airport: Over 3,000 police officers deployed into service ahead of PM Modi’s visit to Jewar

He added that the airport in Jewar brings with it a paradigm of growth.

Workers install a replica of an airplane as preparation are underway on the eve of the foundation stone laying ceremony of Jewar Airport by PM Modi scheduled for tomorrow, in Gautam Buddha Nagar district, on Wednesday, November 24, 2021. (PTI Photo)

“Almost $2 billion worth of investment has already come in, and we are forecasting close to about INR 60,000 crore of investments and production from Jewar and the adjoining area, along with close to 1 lakh employment opportunities being energised through this airport activity,” the union minister said.

Jyotiraditya Scindia also spelled out the Centre’s aviation plans for Uttar Pradesh. “A state that had only 2 airports in the last 70 years, has been transformed by PM Modi in the last seven years. It has 9 airports and this (Jewar) is the 10th airport, of which the foundation stone is being laid. In the next five years, we are going to move from 10 to 17 airports in Uttar Pradesh,” he said.

Responding to political opponents criticising the Bharatiya Janata Party (BJP) for being on a foundation stone laying spree ahead of the UP polls, Jyotiraditya Scindia said, “There are those that believe in being roadblocks to progress for our country, but the development engine is going to chug on because 99 per cent of India wants to move down that route.”

Preparations underway on the eve of the foundation stone laying ceremony of Jewar Airport. (PTI Photo)

He added, “The very fact that today Jewar airport has seen the light of day after 16-17 years of trials and tribulations; the fact the idea was mooted by then chief minister Rajnath Singh in 2001-02 but the files caught dust for almost 15-16 years until 2014 when PM Modi took it upon himself to re-energise and take a relook at the Jewar project. And from 2017, when we had a state government in place with Yogi Adityanath as chief minister, the ‘double-engine sarkar’ turned a dream into reality.”

Speaking of the Centre’s airport development plans, Jyotiraditya Scindia said the target is to reach a figure of 220 airports, heliports and seaports (for seaplanes) by 2025.

“In the last 70 years, we have had 74 airports in the country. In the last seven years, under the stewardship of PM Modi, we have added another 62 airports to our portfolio, so we have gone from 74 to 136. It is our commitment that we will deliver on that next target of 220,” he emphasised.