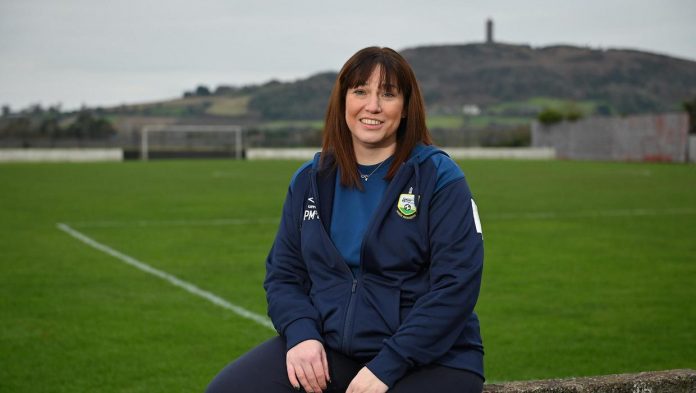 From being a stay-at-home-mum to becoming an award-winning figure in local football, Patricia McCullough has enjoyed an incredible journey in the past year.

he Co Down mum-of-two credits an impressive list of achievements in her local Ards Rangers Football Club to a confidence-boosting course for females in football.

Now as many of us look forward to a new start in 2022, the business partners behind the course — leadership coaches Sinead Sharkey-Steenson and Lisa Strutt — are rolling out a similar programme aimed at women who want to return to work following a break.

Following the success of their Female Football Leadership Programme, the women have launched Career Reboot, which aims to help participants to think differently about themselves and develop the confidence to go back to doing a job they love.

Patricia says she achieved all of the above and more when she enrolled in the Female Football Leadership course which has also benefitted some members of the Euros-bound Northern Ireland women’s national football team.

At the time Patricia was volunteering at Ards Rangers where her two boys Lucas (11) and James (nine) both play in the junior section.

From working quietly in the background taking care of the club’s social media posts and organising occasional events, she has now emerged as an essential ‘go-to’ person for all the members’ needs.

In the past 12 months, Patricia has set up the club’s first female football team, helped establish a mental health programme — The Good to Talk Team — as well as taken on the role of public relations officer.

She has made such an impact that in October she was singled out for recognition nationwide when she was presented with the McDonald’s IFA Football For All gong at the 2021 Grassroots Football Awards.

Patricia McCullough is presented with the McDonald’s IFA Football For All award by Conrad Kirkwood, President, Irish Football Association

Patricia McCullough is presented with the McDonald’s IFA Football For All award by Conrad Kirkwood, President, Irish Football Association

And she says she owes all of her success to the confidence she gained from the course. “It all still seems a bit surreal. I got the picture I had taken with Pat Jennings presenting the award to me framed because I still can’t quite believe it.

“I can honestly say that Lisa and Sinead who ran the leadership course brought out the best in me. They encouraged me to push myself forward and made me feel valued.

The McDonald’s IFA Football For All award

The McDonald’s IFA Football For All award

“Their course helped me develop the confidence I needed to do more for the club.

“The course gave me the courage to go to the club and say, ‘Look, I am the best person for this job’. I wouldn’t have had the confidence before.

“I now have self-belief, purpose, and can bring value and I’m not just a stay-at-home mum.

“My husband Gareth has become the treasurer of the club, so it has turned into a bit of a family affair.”

Patricia (44) was forced to leave the career she had trained for in hotel management when a car accident left her disabled at the age of 21.

She started work in a call centre where she quickly climbed the career ladder from a call handler to an assurance analyst.

However, juggling work, two young boys and with a husband whose job as a company CEO took him away from home for periods of time, seven years ago she decided to become a stay-at-home mum.

Patricia McCullough with her husband Gareth and Pat Jennings

Patricia McCullough with her husband Gareth and Pat Jennings

She explains: “It was hard trying to do everything, and my wage was really just covering childcare costs, so it didn’t make sense to keep working.

“I had severed nerves and tendons in the car accident which left me with osteoarthritis in my right ankle and I walk with the help of a crutch. I have severe back and hip pain and also pain in my arms from using the crutches.

“That has stopped me from pursuing a job that is in any way physical and it is why the work I do at the club is so important as I can fit it round family life and my disability.”

Volunteering to help out with social media posts when the boys joined the club gave Patricia a new interest outside of home. When she heard about the IFA’s Female Football Leadership course in early 2020, she didn’t hesitate to apply.

“I was quite happy doing social media posts and organising the odd fundraiser and I didn’t see myself as a strong player on the team,” she says.

“When I saw the details of the course, I just thought that if I was going to be involved in the football club then I wanted to be more knowledgeable about it.

“The course was focused on confidence building and helping you to find out who you are and on leadership styles.

Patricia with husband Gareth and sons Lucas and James

Patricia with husband Gareth and sons Lucas and James

“It ran from April until December with two-hour Zoom meetings once a month.”

With her renewed self-belief, one of the first things Patricia did was help set up a mental health support system within the club.

The Good to Talk Team is comprised of six club members who signpost and support anyone struggling with mental health.

Patricia says: “It was early in the first lockdown, but it felt at that stage as if it had been going on for ever and we became aware that people were struggling.

“We wanted people who were feeling isolated to be able to connect with the club.

“We did some mental health training online just so that we could be a listening ear to let people know there is someone there to help.

“We have weekly social media posts on self-care, and we encourage people to talk, and many have messaged us for support.”

The ladies team after their first tournament in November 2021

The ladies team after their first tournament in November 2021

Undoubtedly her proudest achievement has been the formation of a ladies’ football team last year.

The team has 26 active members, aged from 17 to 51, and took part in their first tournament last November.

Patricia is excited that plans are underway to establish a female league at grassroots level.

She and her team have secured sponsorship for their first football kits and the girls will be proudly sporting them on the field when they come up against Belfast Ravens seconds on January 30 for their first match this year.

Patricia says: “The aim was to set it up for fun, fitness and friendship, with football coming fourth. It was to give women an opportunity to get involved with the club and do something for themselves and meet new people.

“It is a chance to learn basic football skills but also to chat and have a laugh. Having our first match this month is very exciting and has made everyone really feel part of something.

“The girls are all very enthusiastic and I keep pushing them out of their comfort zones and they respond so positively.”

Now unstoppable, Patricia hopes to further help develop the club and what it has to offer in 2022.

She adds: “We couldn’t do anything without the support of our chairman Gary Gallagher who knows anything we do is for the best intentions of the club, and he supports us and will do everything he can to facilitate us. Also I am indebted to Lisa and Sinead for the confidence they have given me through their course.”

As the girls roll out their new Career Reboot programme for women like Patricia who took a career break, Lisa says: “Our vision is for returner talent to fully understand their worth and be regarded by employers as important, high-value contributors to the modern workplace.

“Women shouldn’t be disadvantaged for taking a career break. Our role will be turning the gap years into a positive competitive advantage.”

You can find out more on Career Reboot at www.rebootandreturn.com