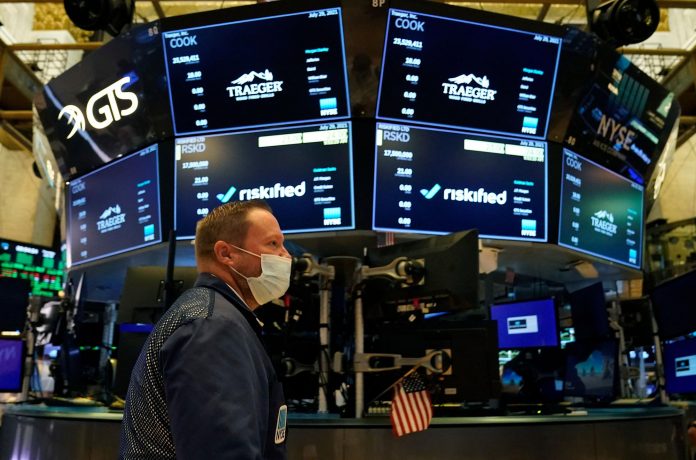 Stocks were mostly higher on Tuesday, drifting to the upside as traders weighed concerns over the Delta variant’s latest spread against optimism over an ongoing rebound in economic activity.

The S&P 500 and Dow each eked out record intraday highs, while the Nasdaq dipped. A day earlier, both the S&P 500 and Dow sank, dragged down by energy stocks amid concerns over reinstated travel restrictions in China due to rising coronavirus infections. Investors on Tuesday eyed the passage of a sweeping $1 trillion infrastructure bill by the U.S. Senate, with the legislation to rebuild roads, bridges and other physical infrastructure across the country now headed to the House of Representatives.

Investors this week have been appraising the extent of the growth slowdown that might be triggered by the latest resurgence in domestic and global coronavirus cases. According to a number of economists, the virus has already set off a measurable deceleration in U.S. consumer spending.

“In the last couple of weeks, we’ve started to see a little bit of pullback in some of the travel and entertainment-type categories, really with the most noticeable pullback in spending on airlines,” JPMorgan Chase senior economist Jesse Edgerton told Yahoo Finance on Monday, citing Chase credit card spending data. “It’s still a small decline compared to the absolute collapse essentially to zero that happened during the first COVID wave back in March and April of last year … Now that we’re at a higher level and people are starting to travel again to some extent, it looks like they’re pulling back more than they did when they were still at very low levels last year.”

Others, however, believe that these concerns will ultimately deflate, especially given they are unlikely to catalyze the same kind of economy-wide shutdowns that characterized the restrictions last year.

“I think lot of the fears around the Delta variant in particular are a bit overblown,” Elyse Ausenbaugh, JPMorgan Private Bank global market strategist, told Yahoo Finance. “Although I think investors are grappling with the Delta variant and treating that as a primary brick in the so-called ‘wall of worry,’ I don’t think it’s something that derails the longer-term view.”

“Ultimately, investors are going to stay focused on those super-strong fundamentals, like easy financial conditions, robust consumer demand and also that labor market recovery,” she added.

Policymakers have also taken note of the pick-up in economic activity, and two Federal Reserve officials on Monday suggested the U.S. economy was nearing the threshold of “substantial further progress” in recovering that would trigger a shift away from highly accommodative monetary policy. Federal Reserve Bank of Atlanta President Raphael Bostic said the economy “would have made the ‘substantial progress’ toward the goal” set by the central bank if U.S. job gains come in as strongly as they did in June and July for another couple months, according to Bloomberg. And Richmond Federal Reserve President Thomas Barkin, likewise, said “on the price side, we made substantial progress,” with inflation running well above the central bank’s achieving 2% average inflation.

The S&P 500 industrials and materials sectors outperformed alongside the cyclical energy sector Tuesday afternoon following the passage of a more than $1 trillion infrastructure bill in the U.S. Senate.

The U.S. Senate on Tuesday secured bipartisan votes to pass a more than $1 trillion infrastructure bill, which includes some $550 billion in new spending. The vote was 69-30 in favor of the bill.

The legislation would provide the means to rebuild physical infrastructure including roads and bridges throughout the country, as well as help address climate change and advance broadband initiatives that have been central to the Biden administration’s agenda. While still a sprawling package, the final price tag of the bill represents a notable step down from the more than $2 trillion plan initially proposed by the administration.

The bill will head to the House of Representatives next, and will be taken up in the fall.

Small business optimism pulled back in July amid a dearth of qualified labor and ongoing supply chain issues, according to the National Federation of Independent Business’s (NFIB) monthly report Tuesday morning.

The firm’s small business optimism index fell to 99.7 from 102.5 in June. Consensus economists were looking for a drop to just 102.0, according to Bloomberg data. Notably, 49% of business owners included in the survey reported job openings that could not be filled, marking the highest proportion ever reported in data spanning back 48 years. Metrics tracking sales expectations and future business conditions over the next six months also both declined.

“Small business owners are losing confidence in the strength of the economy and expect a slowdown in job creation,” NFIB Chief Economist Bill Dunkelberg said in a press statement. “As owners look for qualified workers, they are also reporting that supply chain disruptions are having an impact on their businesses. Ultimately, owners could sell more if they could acquire more supplies and inventories from their supply chains.”

Here’s where markets were trading shortly after the opening bell:

Worker productivity in the U.S. grew at a slower pace in the second quarter than in the first, reflecting in large part the return of more employees to the workforce as the labor market moves forward with its recovery.

Non-farm productivity increased at an annualized rate of 2.3% in the April through June quarter, the Labor Department reported Tuesday. This came following a 4.3% pace in the first quarter, which was downwardly revised from the 5.4% rate previously reported.

Wall Street had been expecting worker productivity, which tracks hourly output for worker, to rise at a 2.3% annualized rate in the second quarter, according to Bloomberg data. The rate of increases so far this year, however, mark the start of a return to pre-pandemic trends. Non-farm productivity had surged by more than 11% in the same quarter last year amid major layoffs of workers in services areas like restaurants and bars.

Here’s where markets were trading ahead of the opening bell Tuesday morning:

Read the latest financial and business news from Yahoo Finance