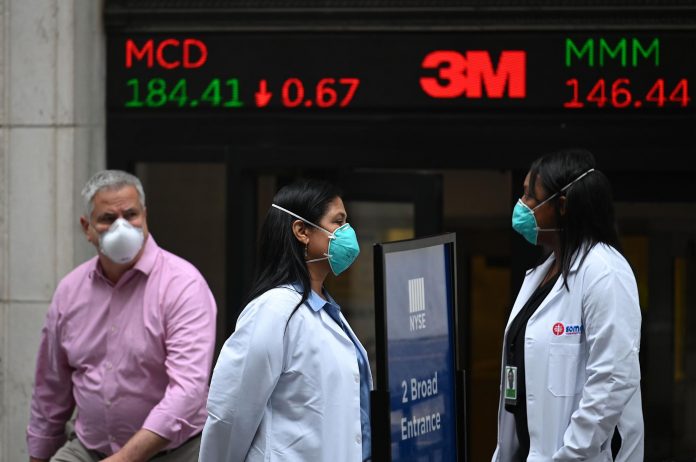 On Monday, major benchmarks suffered their worst declines of 2021, overwhelming quarterly earnings that have almost uniformly reflected a strong rebound. The rising case count driven by the Delta variant — a more communicable form of COVID-19 — pushed the Nasdaq and S&P 500 to their biggest drop in nearly two months, and sent benchmark Treasury yields to their largest decline in over 3 months as investors sought shelter from the uncertainty. The Dow’s point drop was its worst since October 2020.

However, investors reconsidered some of that pessimism in Tuesday’s session, with some analysts pointing out that hospitalizations and deaths haven’t risen as dramatically — and are far below where they were during the worst days of the COVID-19 outbreak. Major indices jumped, with the Dow clawing back more than 1% on the day as traders snapped up bargains.

“There are some silver linings,”Clear Bridge Investment Strategy analyst Josh Jamner told Yahoo Finance Live. “So far, hospitalizations remain low. It seems like the vaccines are very effective against this. That leads us to be optimistic.”

This week’s batch of earnings will include industry leaders like Netflix (NFLX) and Johnson & Johnson (JNJ). According to data from Bank of America, second quarter earnings per share are tracking 3.5% above consensus, led by financials, with raised guidance and better-than-expected topline results also strong.

Still, the ongoing pandemic is proving increasingly difficult to control, even with a mass vaccination effort underway. Investors are fearful that soaring infection rates may trigger new round of restrictions, the likes of which brought the economy to a screeching halt last year. Already in Los Angeles, authorities have re-instituted indoor masking requirements, a precursor to what could lie ahead.

At least for one day, investors’ urge to bargain-hunt from beaten-down stocks displaced concerns about soaring case numbers.

“Whereas a 700-point drop might be a couple of days to get back, we’re seeing it within 24 hours,” Marketgauge.com partner Michele Schneider told Yahoo Finance Live. “That’s just the nature of the fact that the retail investors are so hungry and trained, well-trained, to buy every dip.”

Analysts are cautiously monitoring key sectors that may suffer the most if rising infection rates spark new restrictions.

“While most states appear unlikely to reimpose restrictions on activity, the upturn in infections still poses a downside risk to the economy over the coming months if it prompts people to voluntarily stay away from in-person services,” Capital Economics’ Paul Ashworth said in a note on Tuesday.

This comes at a time when real consumption growth already appears to be faltering, as higher prices reduce purchasing power,” he added. “The upshot is that real economic growth is slowing more sharply than we had originally anticipated, even before the potential impact of the new Delta variant.”

Against the backdrop of surging demand and prices, Corporate America continues to surprise investors to the upside with second-quarter earnings results. About 8% of S&P 500 companies have reported results so far, mostly banks. Of those reporting, 85% have topped estimates, according to FactSet data.

After Tuesday’s trading session, investors will absorb Netflix’s Q2 earnings report. The streaming titan has been racking up Hollywood accolades, yet its stock has been treading water amid investor concerns about slowing growth as lockdowns ease.

Robinhood, the darling of the retail investing crowd and avatar of the meme stock revolution, is one of the most anxiously awaited IPOs of the year. But at least one analyst has serious concerns about the company’s proposed valuation, business model and its regulatory exposure.

In a lengthy note, David Trainer, CEO of investment research firm New Constructs spares no punches for what he thinks is likely to be Robinhood’s “overpriced” stock and dubious outlook. Among the highlights:

With Robinhood’s expected valuation of $35 billion, investors may have better odds of making money by trading risky meme stocks using Robinhood’s platform than by purchasing Robinhood’s overpriced stock itself.

We think the stock is worth no more than $9 billion and that Robinhood will likely not be able to continue the robust growth it saw in 2020 due to looming regulatory risk, increasing competition, and an undifferentiated service.

Fidelity and Schwab can afford to continue offering free stock trading without the payment for order flow revenue thanks to their ability to leverage superior scale to generate meaningful revenue from other services, like asset management.

At the end, Trainer really twists the knife with this line: “The mounting regulatory risk Robinhood faces makes us concerned that the public may see Robinhood’s stated goal to ‘democratize investing’ as a ruse to lure them into speculative trading and gambling that benefits Robinhood more than the individual investor. That said, there are many beautiful casinos in Las Vegas that are tributes to the willingness of millions of people to lose money gambling.”

Here’s where major indexes are trading as of midday:

Wall Street is building on early gains, with the Dow currently up by more than 500 points, as a brisk rally momentarily squelches the fear that overtook markets on Monday. The session has been rather quiet, but appears as if investors are — at least for the moment — returning to fundamentals rather than fear.

Moderna (MRNA) — the scrappy biotech startup that produced one of the most effective COVID-19 vaccines on the market — has seen its stock take on “a life of its own,” according to Michael Yee, Managing Director and Senior Research Analyst at Jefferies.

“It’s priced in a huge amount of assumptions over the next ten years that haven’t played out yet. People believe it’s the Tesla of biotech,” Yee added.

That the biotech firm would be so well-recognized and valued at over $113 billion was no sure bet. For those who invested early in the company, that wager paid off.

Margarita Moilina of El Paso, TX, poses next to a mural depicting billionaire American businessman Jeff Bezos (C) and his brother Mark (L) one day before their launch on Blue Origin’s inaugural flight to the edge of space, in the nearby town of Van Horn, Texas, U.S. July 19, 2021. REUTERS/Joe Skipper

Jeff Bezos, aka the former CEO of Amazon (AMZN) and currently the wealthiest man on the planet, followed fellow billionaire Richard Branson into space early this morning. Bezos and three crew mates briefly soared high above the Texas desert aboard his space venture, Blue Origin’s New Shepard, before returning to earth quickly.

The billionaires in space movement is the vanguard for what many estimate will be the next big market.

June’s housing starts were a tale of strong demand but constrained supply chains. Via Reuters:

U.S. homebuilding increased more than expected in June, though expensive lumber as well as shortages of labor and land continued to constrain builders’ ability to fully take advantage of robust demand for housing.

Housing starts rose 6.3% to a seasonally adjusted annual rate of 1.643 million units last month, the Commerce Department said on Tuesday. Data for May was revised down to a rate of 1.546 million units from the previously reported 1.572 million units.

According to JPMorgan Chase, there may be more to the story:

Single-family permits—the most useful measure of the trend in the data—fell 6.3%, suggesting that the frenzy in the single-family housing market earlier this year is continuing to cool. This aligns with other housing indicators which have moderated lately from a stronger period of activity earlier in the recovery.

Read the latest financial and business news from Yahoo Finance

3 Things to Remember in a Stock Market Crash