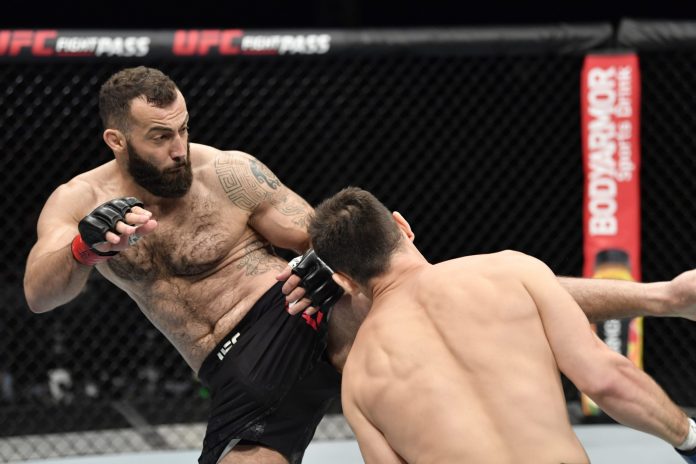 Roman Dolidze enters this fight with a 8-1 record and has won 50 percent of his fights by knockout. Dolidze has won five of his last six fights and is coming off a March loss to Trevin Giles. He is averaging 2.98 significant strikes per minute with an accuracy percentage of 51 percent. Dolidze is averaging 1.75 takedowns with an accuracy percentage of 50 percent.

Dolidze is coming off his first loss at UFC Vegas 22 where he landed 75 total strikes and produced a takedown. From a numbers standpoint, you can argue Dolidze should have been on the winning side given he landed more total strikes and was just as accurate with his significant strikes. It will be interesting to see how Dolidze responds to his first career loss.

Who did our Top Experts Pick?
(click here to find out!)

Dolidze comes from a BJJ, grappling and wrestling background and his first three wins came by submission. He also has legit knockout power and has been quite accurate with his strikes. Only one of Dolidze’s eight victories have gone to a decision. This will be Dolidze’s third career fight in Las Vegas.

Staropoli is coming off a decision loss at UFC Vegas 6 where he ate 126 total strikes and landed just 81 of his own. Staropoli now hopes to avoid three straight losses. It will also be interesting to see how Starolpoli responds on short rest given he’s replacing Alessio Di Chirico.

Staropoli is a 28-year-old from Argentina who is most comfortable standing up and striking. Staropoli has solid boxing skills with a strong overhand and delivers heavy leg kicks as well. He also has two career submission victories, one being a kimura and an armbar in his first pro fight. This will be Staropoli’s second career fight in Las Vegas.

Dolidze is the more balanced fighter in this bout given his wrestling and grappling background. He’s also far and away more accurate with his strikes. Staropoli can hold his own standing up, but he can be limited in the clinch at times. We also can’t overlook Staropoli is riding back to back losses and taking this fight on short notice. Dolidze and his length will also give Staropoli issues.

Give me Dolidze and the cheap price.