UPDATE: Emilio Estevez Breaks Silence about His Departure from “Mighty Ducks” Franchise, Fires Back at Critics – 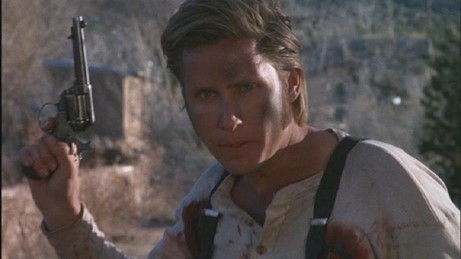 It’s strange times out there in the world right now and seemingly getting stranger all the time: How else to explain the decision by Disney+ to part ways with the iconic figurehead for the beloved family franchise The Mighty Ducks?

Ye olde scribbler of pop culture bric-a-brac ran with a report just a few days back about the shocking split between Estevez and The House That Uncle Walt Built, reporting the buzz that The Breakfast Club star was not invited back for a second season of the hit series The Mighty Ducks: Game Changers due to his resistance in complying with the mandated vaccination shot which Disney is insistent all top-line talent have in order to work on their productions. Estevez fired back at that incorrect narrative yesterday in a statement, attempting to set the record straight once and for all as to why he left the role of Gordon Bombay behind.

What follows is Emilio’s complete statement:

“I am not anti-vaxx. Full stop.

I take this pandemic very seriously, and I am often teased about my continued following of the safety protocols and my abundance of caution.

I want to address what transpired and clear up some falsehoods which appeared in an article regarding my decision to depart The Mighty Ducks: Game Changers.

In the final analysis, this was nothing more than a good old fashioned contract dispute and not, as some would believe an anti-vaccine position.

While I can’t speak for anyone else in regards to this polarizing, sensitive issue, I have my own lived experience.

In late February 2020, at the end of shooting the pilot for The Mighty Ducks: Game Changers in Vancouver, I wasn’t feeling 100%. I chalked it up to being on a cold set and on an ice rink day after day.

I drove to Vancouver for the pilot, due to news of “an emerging disease,” which would eventually be known as “Covid 19.” My decision to drive there and back was to avoid mass crowds and international airports. I already started wearing face coverings, gloves and using hand sanitizer. I also genuinely love driving across and around America, as anyone who knows me can attest.

En route from Vancouver to Los Angeles I became noticeably ill. Once back in L.A. I begged several doctors to be tested for this new variant of flu. I was assured that “I didn’t meet the criteria,” or “There’s no way you have it.” After multiple efforts, I finally received a car side Covid 19 PCR test on March 13, 2020. I continued to become increasingly sick, suffering from fever, sweats, brain fog and mood swings.

On March 17, 2020 I got word I had indeed contracted Covid 19. Thankfully I refrained from visiting my elderly parents and others until I received my results. I had discussions with doctors and contact tracing personnel from the L.A. County Department of Health.

I suffered the summer and fall of 2020 from what we now know as “Long Haul Syndrome.”

As the show went back into production in August 2020, I reluctantly soldiered on, but was uncertain about how I would be safe on set. I questioned the wisdom of returning to make a tv show in the middle of a pandemic and how actors could be considered “essential workers.”

The show producers tried their best to assuage my fears of coming back to work. “You have natural immunity!” “You’ll be the safest one on set,” I was repeatedly told. Additionally, I was warned by my former reps about possible consequences and legal jeopardy I could face for not reporting to work as ordered.

So, I returned to Vancouver. I followed the Canadian quarantine mandate as well as the strict “Zone A” on set Covid protocols. I did not complain, nor did I release my diagnosis to the public. I wanted to try and preserve the show morale and be a leader, however, while still suffering from Long Haul Syndrome. The legacy of the franchise was more important to me than my own health.

In retrospect, I wrongly chose to protect the show over being transparent about having contracted Covid-19. I may have provided another public example to wit, how we are all vulnerable to this deadly disease.

The quoted “anonymous sources,” producers and show runners all know the truth.

Simply put, I am anti-bully.

My exit from the show was due to a myriad of creative differences – any other narrative is false.

To the fans of the franchise – I am as disappointed as you are.

To my “Ducks” cast and crew – have a wonderful Season 2 on the show and please know that I will miss you all.

It was an honor and a thrill to be able to return as the iconic and beloved character, Gordon Bombay, a character which has been a celebrated benchmark in my 40 year career. And I thank the studio and the producers for creating an opportunity to allow me to visit him again.

Luckily for Emilio Estevez fans (of which I count myself proudly as a card-carrying member), the stalwart legend is headed back to reprise perhaps his most beloved character, William H. Bonney, commonly known as Billy the Kid. Young Guns III is set for a Santa Fe, New Mexico shoot with Estevez co-writing (alongside Young Guns guru and creator John Fusco) directing and starring in the new film which is scheduled for an August 2022 release!